One of the many cool things about working in clean energy is the innovation behind our transition to a greener energy future and the impact of clean technology across different sectors.

It's fascinating to work with our clients who are developing and producing renewable energy but it's equally interesting to see how this energy is being successfully and efficiently harnessed to power a more sustainable world.

This article is a great example of how clean technology is being utilised in the marine industry to combat reliance on fossil fuel and to prove their is a clear path towards an environmentally friendly energy system of the future.

After experiencing a power failure during a race across the Atlantic in 2013 and motivated by the sight of pollution-happy cargo ships continually passing by, Victorien Erussard and his team came up with the idea to create a ship that uses different sources of energy.

The base technology already exists for use on land, where it helps overcome the problem of intermittent power supply from renewables, but this is the first time it's been used at sea to produce hydrogen 'live' during stopovers and navigation.

A team of over 30 people, including architects, designers and engineers, worked to prepare the ship for its six-year voyage, in which it will navigate 50 countries and stop in 101 ports of call.

A northern European tour is scheduled for next year, including the UK. The crew aims to reach Tokyo in 2020, in time for the Olympic Games.

The team isn’t rushing things. The mission started in June 2017, and will last six years, reach 50 countries, and make 101 stops. The vessel has already travelled 7,000 nautical miles, to port cities around the French coast, and is now in the Mediterranean. It’s due to arrive in Venice on July 6, and spend 10 days in port, where the crew will meet the public, and hold set up an interactive exhibit to showcase environmentally technologies. “The idea with this ship is to prove a potential energy system of the future,” Erussard says. He’s determined that the same types of energy generation and storage that he’s using onboard could be used on land too, to reduce dependence on fossil fuels, and maybe one day to clean up those container ships he'll pass en route. 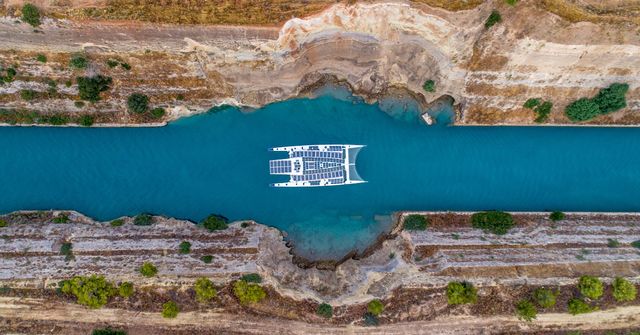 One man got tired of seeing pollution-heavy cargo ships crossing the seas, so he's traveling the world in a catamaran built to only run off renewables https://t.co/yHehxtevKN

The Boat Circling the Planet on Renewable Energy and Hydrogen https://t.co/GIAJlyiZfT pic.twitter.com/1gUyFQZtYq

The boat circling the planet on renewable energy and hydrogen gas https://t.co/3QglD8o6I4

Wow, that is one cool funky boat! Here’s hoping it spurs some innovation in ship design!!! https://t.co/2O4MCpIZRM

The battery decade: How energy storage could revolutionize industries in the next 10 years
Jon Rose

Microsoft will be carbon negative by 2030
Aine Crossan